Self Portrait In Five Parts

Started in 2011 during recovery from a major illness these five paintings are based on an original idea in 2005 which subsequently became part 5. Parts 1 to 4 were completed over an eight year period. They are a set of nuances of me and as such are indivisible. Elsewhere in Opvscvla you might notice that their titles have been redeployed as headings in my autobiography-of-sorts (71).

After nearly six years in 2018 I completed my self portrait in 5 parts, part 2 (Soul) being the last part to be painted. The parallel life story which initiated and tracked this mammoth task might be of some interest but as a general rule I am silent regarding any discussion about meaning and content, sorry, they are, to use a much worn out phrase, what they are. My work, for good or ill, stands on its own and speaks for itself. Such meaning as is there is either self-evident given enough effort on the part of the viewer, is not worth finding or is not meant for you. There are a great many clues in the symbols, images, hints and juxtapositions to get your teeth into, here as well and elsewhere, if you think its worth the effort. Together they represent the key elements of my life and depict all of me that in my view is meaningful. Such direct comments as I am prepared to make regarding their inception and creation follow below these images. 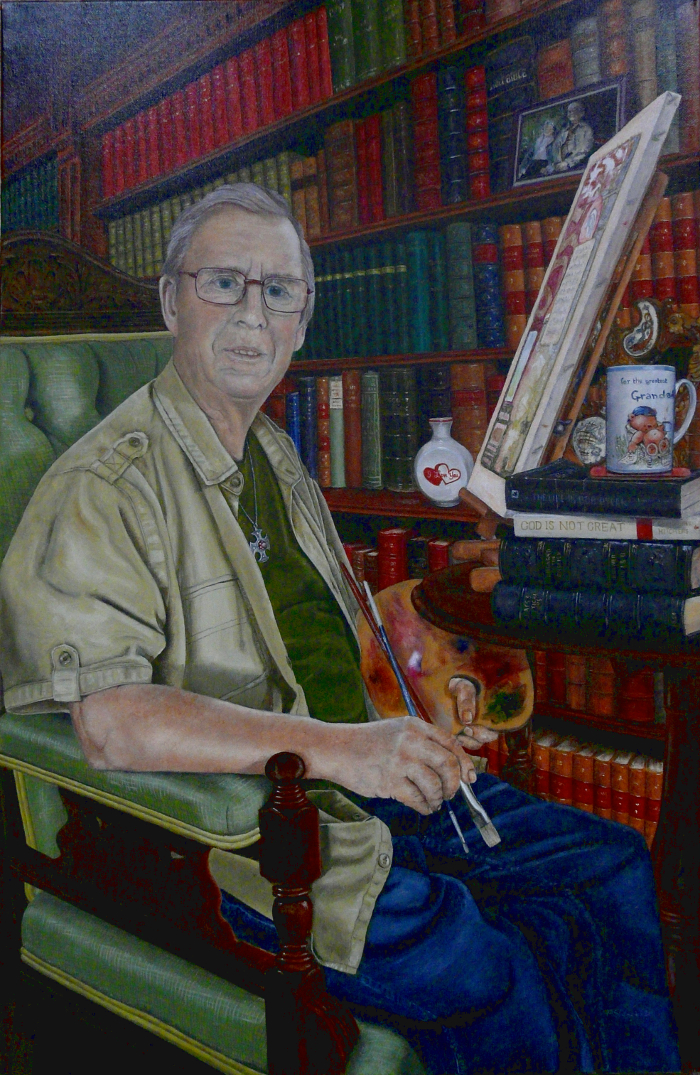 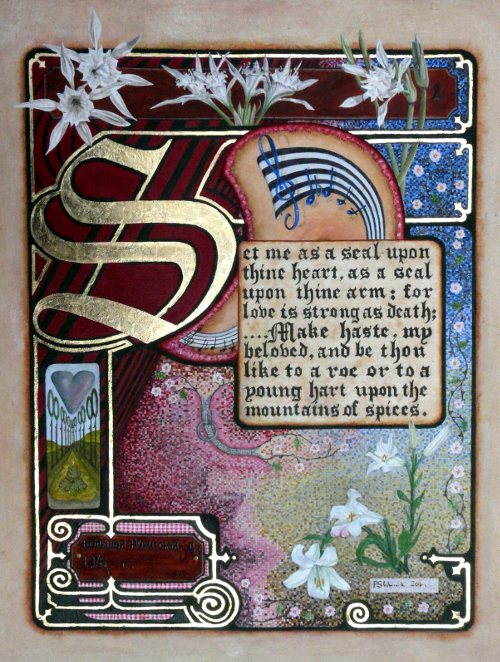 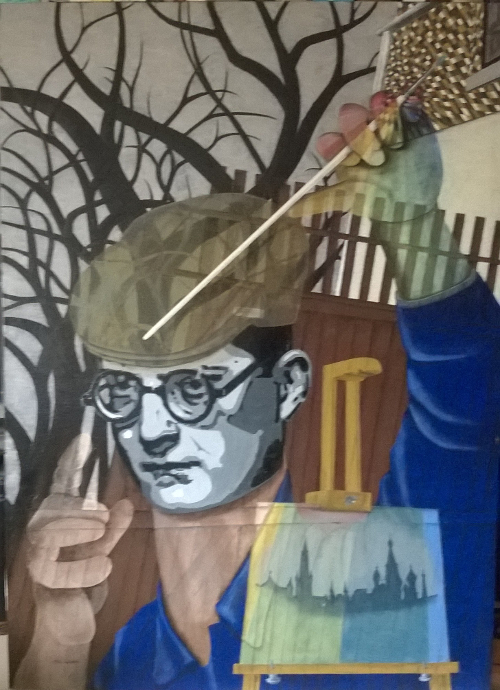 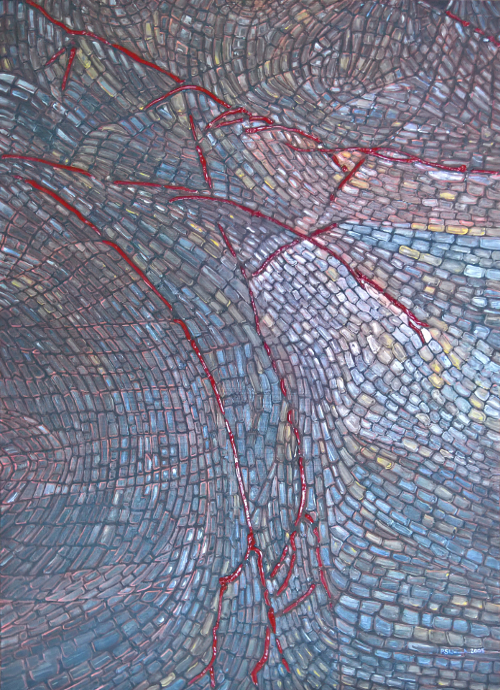 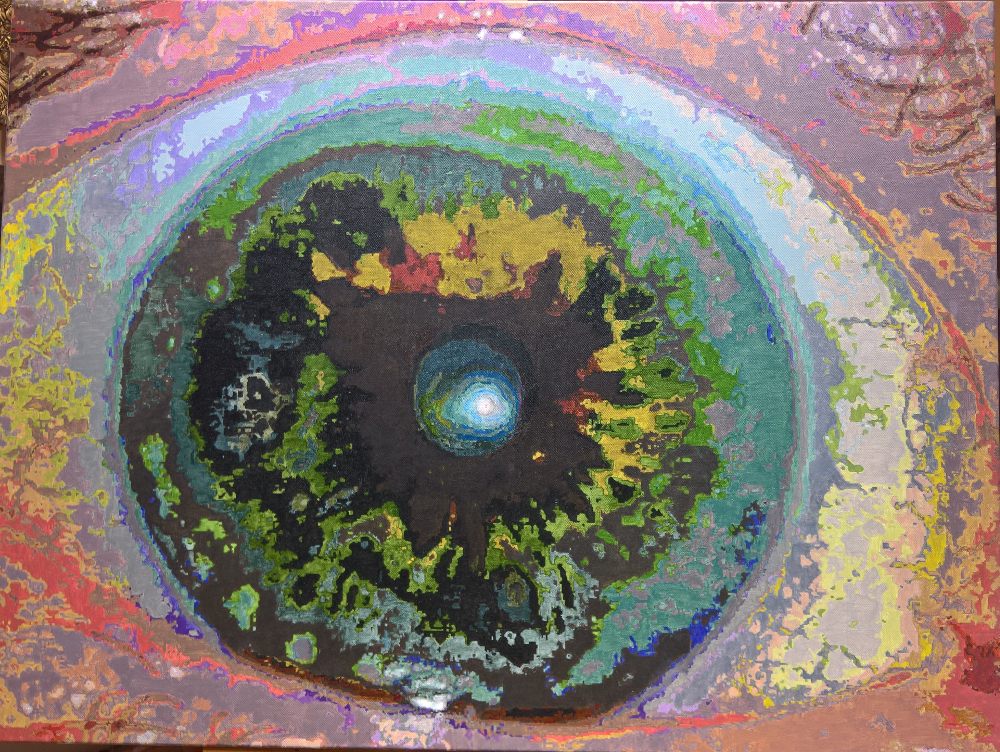 On Christmas eve 2010 I found myself in the acute assessment unit at our local hospital with what turned out to be a dodgy appendix. By the time it had been properly diagnosed, it had burst. After a bodged appendectomy I contracted peritonitis, had a close encounter of the grim reaper variety and after another four weeks left the hospital wholly unfit to survive, 28Kg lighter, effectively disabled and dependent on a wheelchair. The NHS sent me home with an ileostomy bag, a mucous fistula and a promise from the consultant that in spite of the hospital’s best endeavours to remove my existence from the planet he would reconnect me if I was ever stupid enough to trust him again and if I was strong enough to recover. I took a certain amount of pride in the fact that I now had my very own RADAR key.

It is an old cliché but a true and salutary one: there is nothing like coming within a whisker of one's own demise to focus one's attention on the things that matter in life and in particular what you hope, if anything, to achieve with whatever life is left to you. This is going to sound bizarre and it probably is but I decided to work backwards from a future death and work out what I might hope to achieve and make a realistic plan for executing that within what I now fully expected to be a foreshortened lifespan.

OPVSCVLA was conceived which, amongst other things featured a biographical painted work called Self Portrait in 5 parts. Work started, almost, it could be said, from my wheelchair in the April of 2011 (I depended on the motive power of my dear wife for 4 weeks) and was completed just over six months later in August 2018.

My corporeal self. I actually look sick in it. Besides myself I have included my beloved books in an invented library setting. I leave markers in books that are particularly central to my life. My books are as much me as about me. What books I have read, and the order in which I have read them is in itself a part of my story. The books you see, the things you see, the furniture you see are not just objects, they have connections. They are connections to and from me and the things and the people that I love.

In the picture I am painting part three of the five parts, a painting I had then not yet started other than in my mind. So part 1 remained unfinished until Part 3 had been nearly completed and could be added to Body. This was my convoluted, and I think rather cunning Baldrickian plan, to cover two possible outcomes. Part of Body was to remain unfinished until part three, the last part to be started, was complete. If my annihilation had come first then I would have rendered myself 'unfinished' and covered both eventualities!

My non-corporeal self. We have the same names Body and I. But Body is what you see, Soul is what I am. Soul can see you but you cannot see Soul, you can only search for him as you would search in the atmosphere for a jet plane which has left behind it a slowly dissipating trail. I am not mysterious, just not visible, not directly knowable but inferable. I am also revealed in the footprints I leave on muddy, dirty paths. Look for me in the processes of making of this. Search amongst the contours and the maps and the shorelines and in the rivers of colours, in the way they touch, cross, impact, reference and vibrate. Once found, I will stay with you in your own invisible, unknowable universes and commune with your soul. I wait for you.

This is the most intensely confessional, personal aspect of me. You must do the legwork for answers because I will be of no help. Some of the answers I no longer want to acknowledge. The title is straightforward. My adult life has been defined by a promise, a promise I will not break for all of my life, to the very last microsecond.

I present this aspect of myself masked in the persona of one of my heroes. I appear to be conducting a rainbow with a paint brush on an overcast day dominated by this backdrop of skeletonic, undead trees. I am painting a hotel room embedded in a skyline which my hero would recognise. I reminisce and reflect on Blue in Green from a similar situation elsewhere. I am as real and as apparent in my lies as much as in my truths. I comprehend the realities of others from their art. They are the most visible to Soul which absorbs realities from others to enhance it's own. I acknowledge and embrace the transparency of appearance and also my insignificance in other universes but revel in the power and majesty which I hold in my own. I have decided upon my purpose, I know both who I am, what I like and what I do. Here I conduct a symphony of self and am about to recapitulate.

In part 5 I present that aspect of me which interprets and understands the cosmos it finds itself in. Metaphysics, transcendentals and supernatural gods are as fake as the Tooth Fairies. They were created to take control of the lives of the credulous, the lazy, the submissive, the weak and the needy. I do not acknowledge them or bow to them. I am unique, my destiny is not controlled or decided by any agency but my own. I am not predetermined but self-made. I am a free man. What about you though? Are you free or are you well and truly fucked? You decide. I, Paul Warwick, decided at the age of 10 years and 8 months by a bus stop in Albion Street, Swindon, England that I would be free and that major turning point in my life is here depicted.